Here is my keyboard: 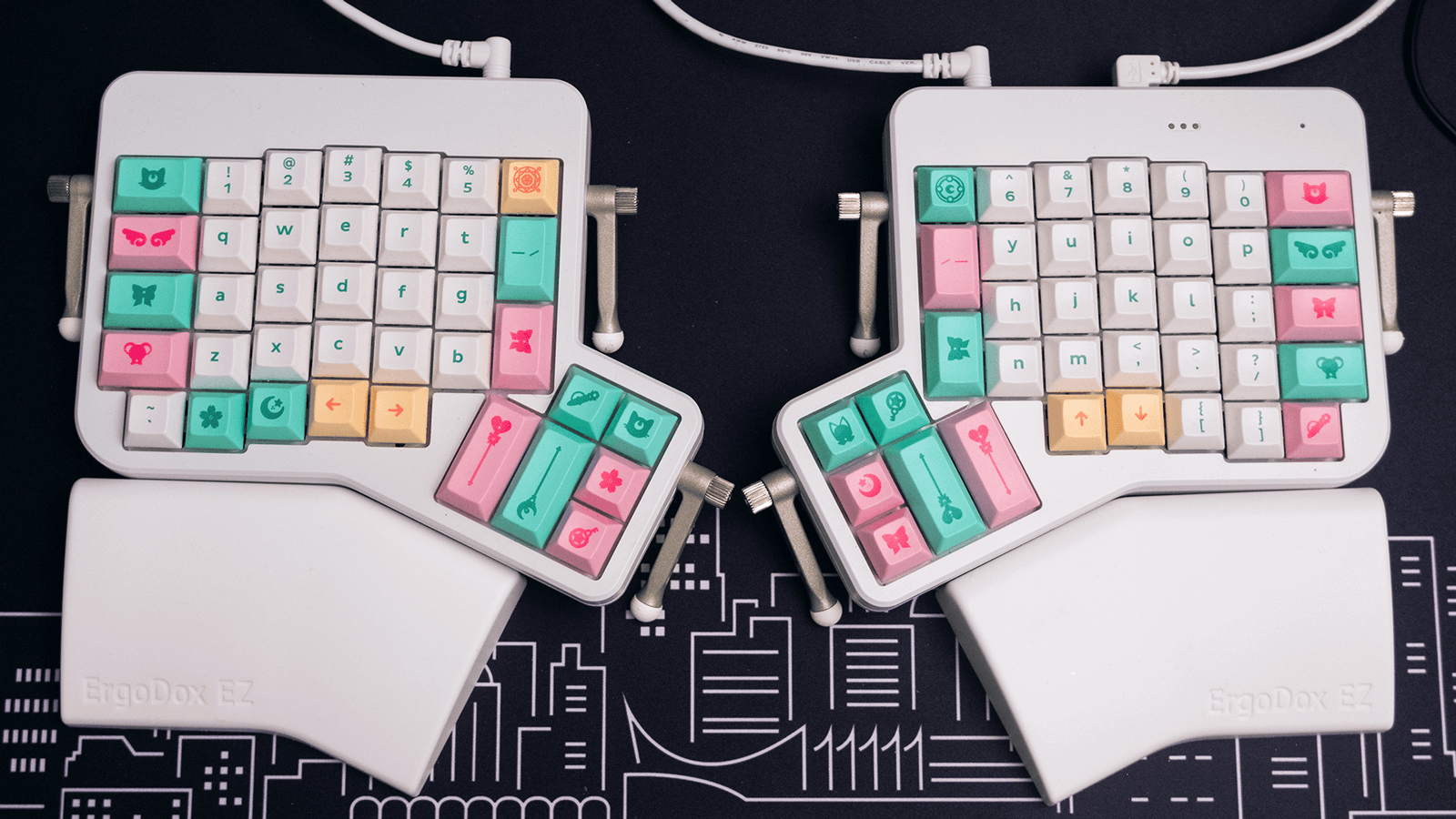 My goal was to be able to do as much stuff as possible with only the left side of my keyboard, save for typing actual words. So for example, I put an Enter key, F5, and navigation keys like Home and End on the left. On my second layer, I have arrow keys, and the numpad so I can type numbers one-handed.

Layer 0, optimizing for doing stuff with just the left side.

My only macro key is the em dash on the right thumb cluster—no longer must I have a permanent tab open to it in order to copy and paste. I have so much power now. I have F12 in the bottom right corner so I can take screenshots in Steam.

Layer 1 of more keys for efficiency. The bottom leftmost key is the layer toggle; I can hold it down with my pinky and use arrow keys or type numbers with just my left hand.

I honestly don't use this next layer much, so I'm not used to my 'efficient' key configs yet (like the arrow symbols ← and → on the right side). I use the numpad to type symbols with alt codes. A bunch of other keys are just left over from the default configuration. 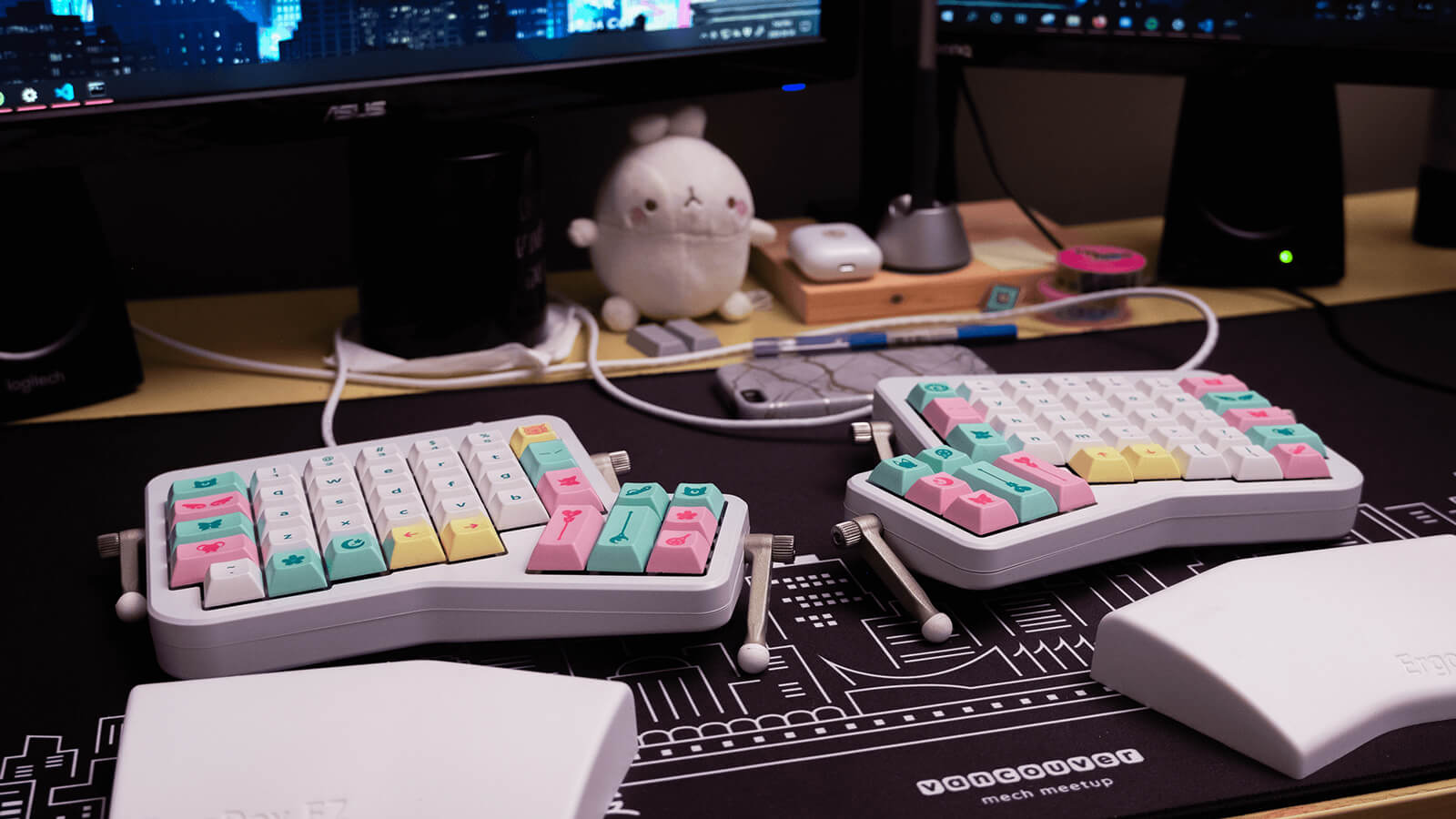 tl;dr: I like it! It's more comfortable than typing on a normal keyboard. I enjoy the nerdy customization part of it. My keycaps are cute. It is, however, quite expensive, especially if buying from Canada.

The ortholinear (i.e. grid) layout tripped me up a bit, mostly for the bottom letters—I kept getting C wrong, and had to change which finger I used to tap it (middle instead of index finger). I also used to type the B with my right hand, and had to relearn it on my left.

With this layout, my hands don't need to move much—for example, on a typical keyboard I'd have to physically lift and move my entire hand to reach the arrow keys, or navigation keys, or the escape key. Now since all the keys are much closer, my hands stay in place and only have to reach slightly to get to all the keys I need. (There are a couple of keys on the thumb clusters that I pretty much never use just because they'd require lifting my hands to reach.) 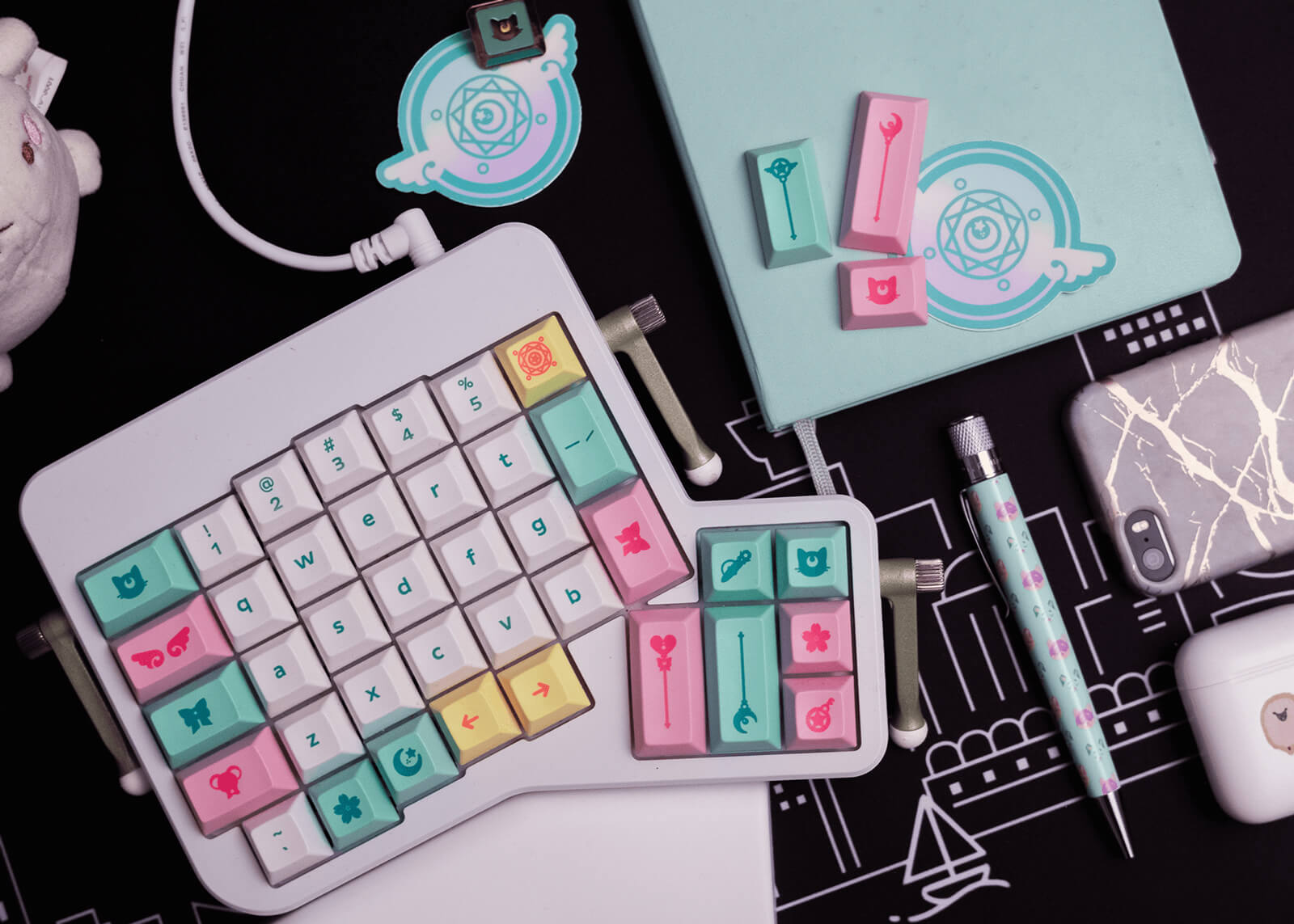 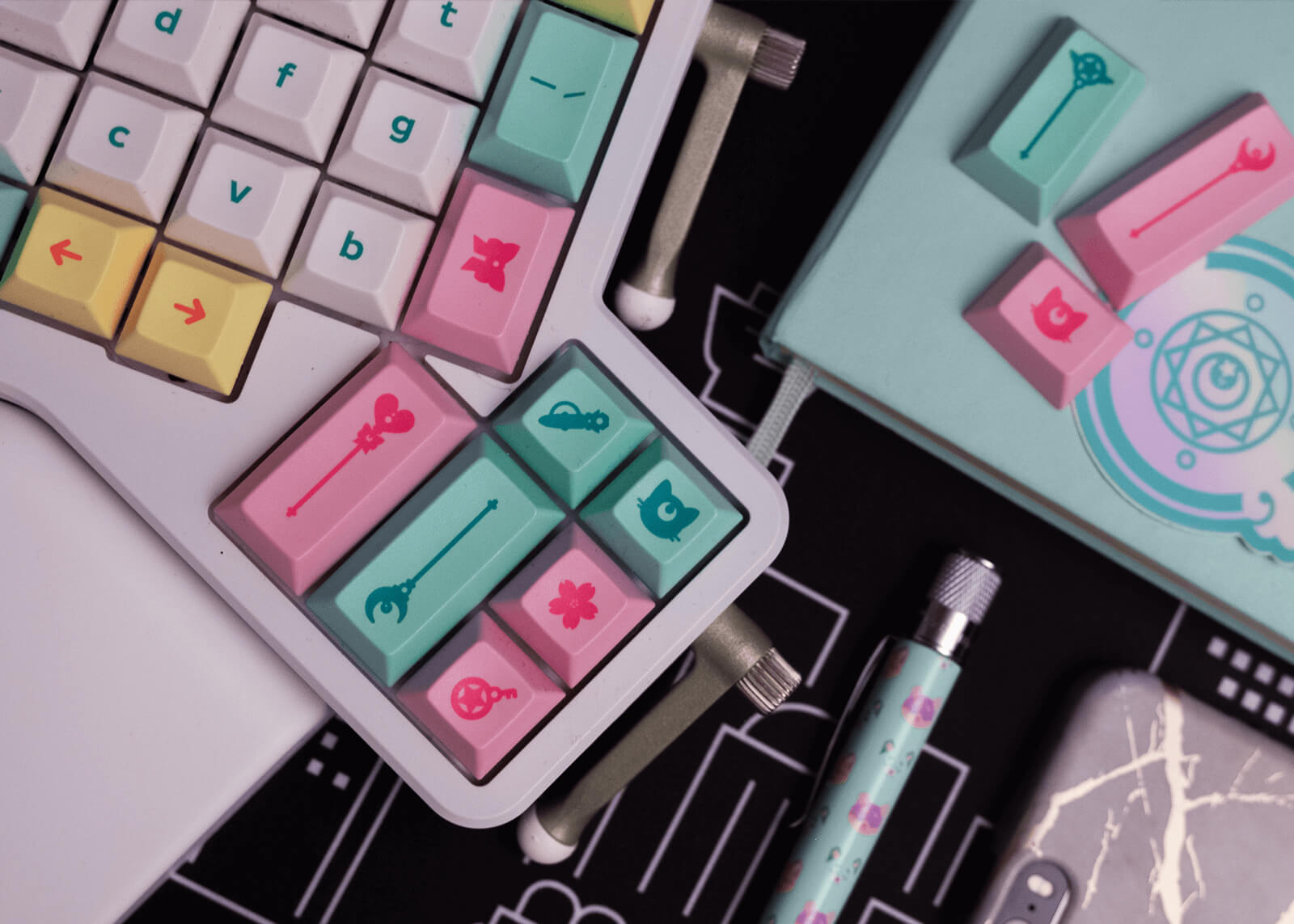 I have small hands, and the thumb clusters are a bit too far away to be 100% comfortable. My thumbs would naturally rest right in the gap next to the cluster, which is kind of a bummer. To offset strain on my left thumb, I put the spacebar on both sides. I would have considered getting the more compact Moonlander instead, which was unfortunately announced after I bought the Ergodox.

I really like changing things around! I thought I would be annoyed by having to figure out what would work for me (like, ugh, I have to think in order to use this keyboard?) but then I found it nice to be able to pick where I wanted to put keys, and remove stuff that I didn't want. The configurator is an easy-to-use GUI and doesn't stress me out.

Does the Ergodox actually help me? When I first started using it, I didn't have physical therapy needs, so I didn't notice an improvement. But, when I tried switching back to my old keyboard, I noticed right away how much worse it felt. I also realized that having a wrist rest is essential—bending my wrists is seriously uncomfortable. 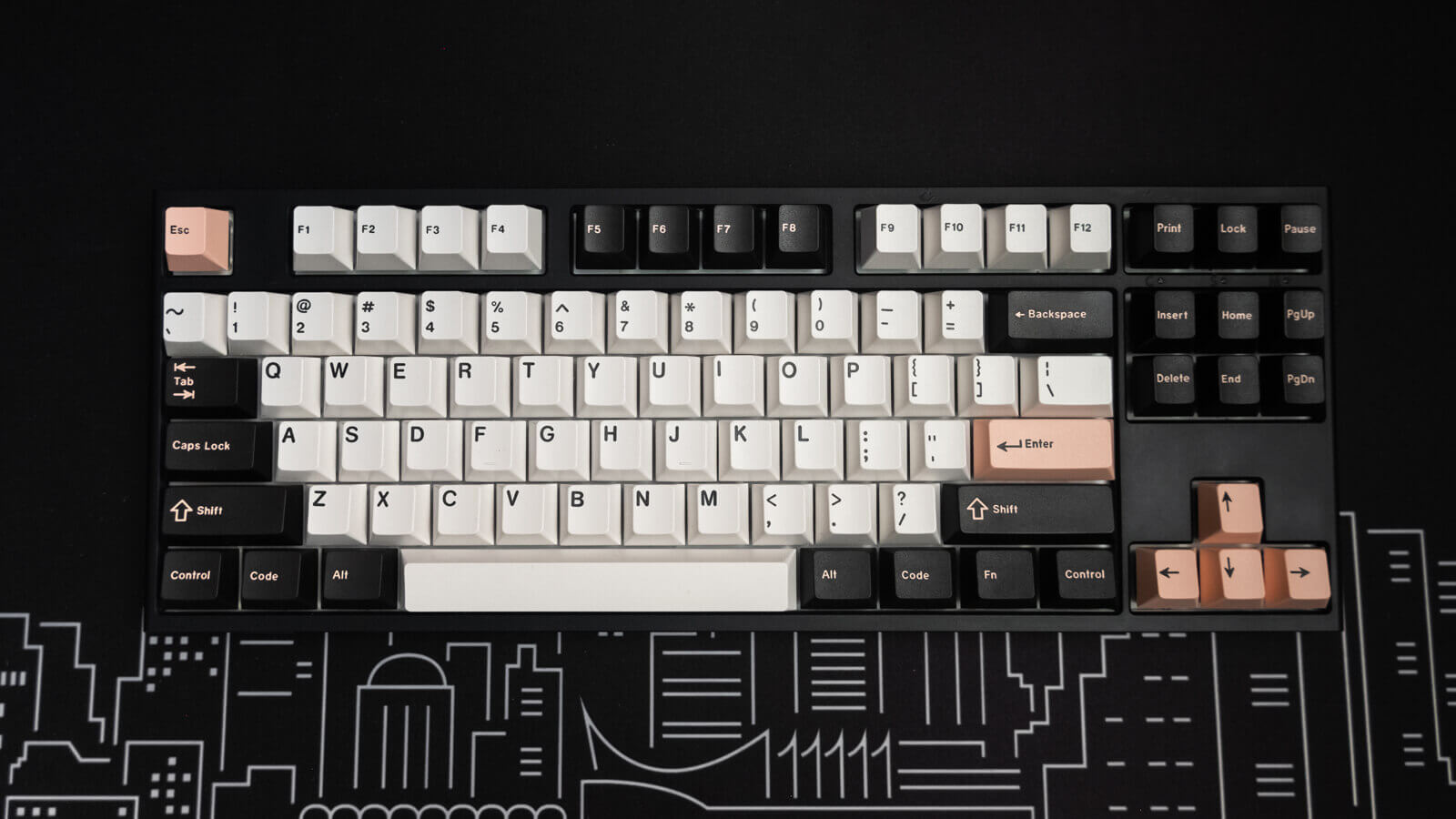 My old keyboard: a Ducky One 2 with GMK Olivia++ keycaps

It didn't take me too long to get used to typing on this, and now whenever I use my laptop keyboard, I get tripped up by the different key placements (e.g. my Ergodox has Backspace where the Caps Lock key normally is). It's been a few months and the only thing that trips me up now is key combinations that require multiple key presses, such as CTRL + SHIFT + ARROW KEY to highlight text.

i refer to this kind of niche hobby nerdery as water drinking reddit, after the iconic prozd skit.